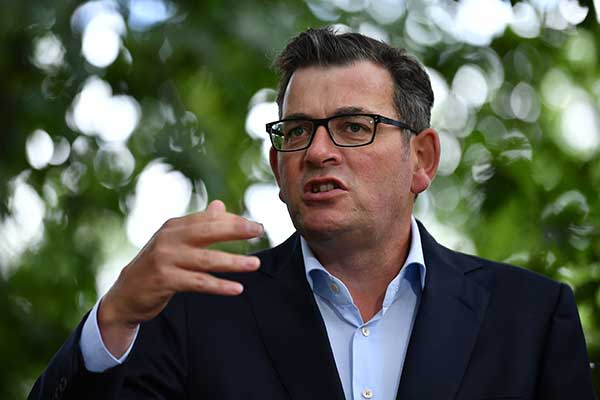 A manufacturing plant to produce rapid antigen tests will be set up in Melbourne, with the capacity to make 50 million of the sought-after test kits per year.

RATs have been in scant supply in the state, with the lack of tests for COVID-19 leading to shortages of supermarket supplies, business closures and even flight cancellations at Melbourne Airport.

The companies Lumos Diagnostics and Planet Innovation will establish a plant in Melbourne to make the tests, using money from the state's investment fund.

The Victorian government says the plant will be able to produce a million tests monthly from April, three million from July, ramping up to 50 million tests a year from October.

"We know we are going to be using these things for quite some time," the Premier Daniel Andrews told reporters on Wednesday.

He said the RATs would initially be used to meet demand within Victoria, but any surplus could be sent interstate or even exported.

Innovation Minister Jaala Pulford acknowledged the tests have been hard to come by and said they would remain in high demand in different sectors of the economy.

The government would not disclose how much money would be spent on the facility, citing commercial confidentiality, but said it would create 95 full-time jobs at first, and 70 ongoing jobs.

The facility will also be able to produce tests for infectious diseases, tropical diseases, chronic diseases and reproductive health.

Thousands of school students are currently being told to use several RATs per week to stop the spread of COVID-19 on campuses.

The state government is "strongly" recommending primary and secondary students and staff undergo twice-weekly rapid antigen tests at home before school, with those at specialist schools asked to test five days a week.

About 100 students and 50 staff from 121 schools across the state returned a positive rapid result on Monday as classes resumed.

Six million RATs were delivered to campuses by the start of school, enough for a fortnight, with 14 million tests to arrive over the first four weeks of the term.

We make our trams.

We make our beer.

We make our dimmies.

And soon we'll be making our RATs too.

We've just announced that we're supporting local Victorian businesses to establish a new manufacturing facility which will produce up to 50 million RATs per year. pic.twitter.com/Dfy6czUAUA