Victoria to spend another week in lockdown 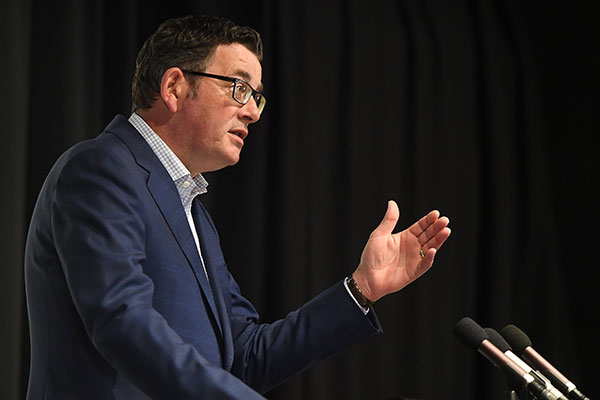 Victoria's lockdown will be extended for a further seven days as authorities work to "extinguish" an outbreak of the highly contagious Delta coronavirus variant.

The lockdown was initially due to end on Tuesday night, but Premier Daniel Andrews announced stay-home-orders would remain in place until at least 11:59pm on July 27.

"We're dealing with an outbreak that we think we are running alongside and we just need to get in front of it in order to pull it up," Mr Andrews told reporters.

He says easing restrictions while new case numbers are in the single digits isn't an option, due to the speed and ease with which the Delta variant has spread.

"If we leave it smouldering at low levels ... then there's every chance that we are back here, locked down again," Mr Andrews said.

Victoria recorded 13 local COVID-19 cases in the 24 hours to Tuesday morning, four of which were previously announced by authorities, bringing the total number of infections in the outbreak to 85.

Three people are in hospital but none are in intensive care.

Twelve of the new cases are linked to the current outbreaks of the Delta variant in the state, including seven staff and patrons of Ms Frankie restaurant in Cremorne and two students at Trinity Grammar in Kew.

A case involving a woman in her 20s from Roxburgh Park remains under investigation, though authorities believe it is connected to a family from the City of Hume, who tested positive after returning from NSW earlier this month.

Nine of the cases were in isolation during their infectious period.

Mr Andrews said two people had unwittingly become "superspreader(s)" of the Delta variant after attending several events while infectious, including the Geelong-Carlton AFL match the MCG on July 10.

Chief Health Officer Brett Sutton said about a third of the state's close contacts were from regional Victoria, mostly due to the spread in the MCC Members' Reserve for the Geelong-Carlton game.

Some 18,000 close contacts are self-isolating after coming into contact with positive cases, including residents of apartment blocks in Maribyrnong and Richmond.

There are more than 300 exposure sites, spanning from Phillip Island in the south of the state to Mildura in the northwest.

The government also announced red zone travel permits, needed to get into Victoria from NSW, will be paused for two weeks.

Only authorised workers and those who apply for and receive an exemption will be able to travel between the two states.

There will also be minor changes to exempted workers from Wednesday to include services that operate solely outdoors where physical distancing can be maintained, such as gardening, mobile pet grooming and pamphlet delivery.

Students with a disability will also be able to return to on-site learning from Wednesday if a parent or carer indicates the student cannot learn from home.

A full list of Victorian exposure sites can be found at https://www.coronavirus.vic.gov.au/exposure-sites